At the beginning of the semester, Gillan Smith’s article set up the challenge to develop an “independent language of interaction” that fully exploits the medium of computers — similar to how the early techniques of cinema eventually stabilized into a coherent visual language. While its contentious that such a singular language can be created for HCI, I think most agree that because cinema is a more mature medium, studying its critical vocabulary can be insightful.

With this in mind, I think Christian Metz’ article gives an insightful phenomenological account for why the medium of film is so powerful. Central to his explanation is the notion of realism. Basically he argues that by captuing motion, film achieves a level of realism that makes its images present to us. Whereas the static images of photography convey a sense of reality in the past, the moving images of film convey a reality that is ‘here and now’. The result is that the viewer is able to ‘participate’ in the represented reality — by identifying with characters, reacting viscerally and emotionally to the action, etc.

However this degree of realism hinges upon the distinct separation between the represented space and the audience’s physical space. This boundary of the screen allows the viewer to forget the real world and enter in to the diagesis. He contrasts this with a stage performance in which this boundary does not exist. The audience shares physical space with the represented reality and thus, says Metz, the vehicle of representation is too real. The result is that the viewer is all too conscious of the artificiality of the performance and ends up identifying more with the actors themselves than with their characters.

I think Metz’ analysis holds a lot of insight for HCI. Not only has he revealed realism as a powerful aspect of the film experience, he has also illustrated how it is affected by particular qualities of the medium, namely motion and separation of space. I don’t mean that we should simply try to mimic the realism of film–in fact I can see one problem with attempting to do that–but rather we can think about the degree of realism which is most appropriate in particular design contexts, and give consideration to how motion and separation of space affect the experience. As a starting point for this kind of analysis, I’ve placed some different interactive experiences where I think they might fit into Metz’ model: 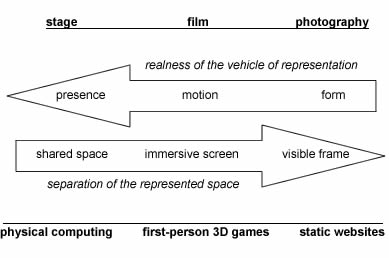